Are you familiar with oil spill planning or response, marine science or engineering, journalism, mass communication or public relations? We need committee volunteers with knowledge in these areas!

Committee volunteers are appointed by the board in an annual application process, completed in consultation with committee chairs and staff.

Volunteers are appointed for staggered two-year terms. Each committee has at least one member from the Council’s Board of Directors. This committee structure is stipulated in the Council’s bylaws and in the Oil Pollution Act of 1990.

Most committees meet every 4-6 weeks. Meetings are often held via teleconference because many members live in remote Alaskan communities. Most volunteers donate anywhere from 5 to 10 hours per month, although this varies by committee.

Are you ready to volunteer?

Meet some of our volunteers: Tuesday January 20 2015
During his summer vacations from college, council volunteer John LeClair got his start in the field that he would come ...
Learn more. Tuesday September 23 2014
On the way out the door on her last day before she retired from 23 years on the council’s staff, ...
Learn more. Thursday July 24 2014
The council held its annual board meeting in Valdez during the first week of May. Among other business, new board ...
Learn more.

Gordon Scott tells his story of “Life at half a knot” 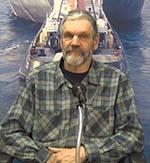 Sarah Allen: Oil spills have been a major influence on new volunteer John Kennish: Chair of science committee long interested in effects of toxins on environment and health